In my previous blog post, Inspiration: A Ghost Story, as well as talking about my writing inspiration, I told a story about a paranormal experience that I had when I was younger. This wasn’t the only time that strange things have happened to me, and I’m going to use this blog and probably others to tell the story of what happened to me in an apartment in which I lived. As the previous blog was so popular (it’s one of my most-read posts), I wanted to share another experience.

I was going to craft this into a novel, but I didn’t know how to write it, so I will try to serialise it into several blogs. I hope you enjoy reading. 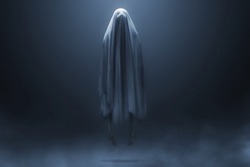 Click the links below to read the other parts of the story:

Back in November 2011 I wanted to move. I’d just had a nasty breakup and was also looking for another job, so I figured I would move closer to the city as that’s where I was looking for work. I didn’t want to move into the city proper, so I looked around in some of the towns that bordered it that had decent transport links to the city centre.

I looked at several apartments in a few different towns until I visited the one that I would ultimately move to. I got shown around 3 or 4 apartments in the same block, and the last one we went to just called to me. You know, how sometimes you just know that that’s where you should be?

As I was being shown around, I asked several questions ranging from what the rent was to facilities in the building – all the standard stuff you ask when looking around somewhere. The last question I asked – which I hadn’t asked in the previous apartments – was; why did the previous tenant move out? I just wanted to know why they moved, if there was an issue with the place they didn’t like etc. The answer I got was, “He had to move quickly; he just wanted to leave.” Now, I didn’t really think much of it at the time, but with everything that happened to me, I look back on the words in a different light.

I decided this was the apartment for me, and within a week or so, I was moving in. This was the second place I would live in since moving out of home, so I was prepared for everything that I needed to sort out, like utility suppliers, other bills, movers and all that jazz. Once I was in and got all my stuff sorted and set up, I settled into my new home.

At this point, I was still looking for a job, but things happened at my place of work that made me want to stay. Simply put, shit was hitting the fan, and I didn’t want to leave them in the lurch when they really needed me. So I stayed and dealt with the travelling – it wasn’t too bad, to be honest.

It was winter so when I was coming home it was dark and usually raining – that’s England for you. When close to my apartment, I would drive up a road that was directly opposite my French doors and small Juliet balcony. For no reason, I would generally look up at the doors when I was stopped at the end of the road, checking for traffic. There was never anything there. Until one day.

It was around mid-February, and it was still dark during my journey home. After a long day of fixing computers for stupid people, I was tired, and I just want to get home. As I got to the end of this road, I stopped and did my usual of checking for traffic, but out of the corner of my eye, I saw something in the window.

The blinds were drawn – they were permanently like this; who needs natural light? – and as I looked up at the doors, I saw what looked like a hand poking through the blinds. At this point, I could definitely make out fingers, and slowly I saw a head poke its way through them too. I don’t know how long I sat there looking at this, whatever it was, but it was a good job there were no cars behind me; otherwise, they would have been getting pissed off I wasn’t moving.

Suddenly it struck me; someone was inside my apartment. I quickly checked for traffic, and, seeing none, I quickly pulled out of the street and whipped around into the car park at the rear of the flats. I’m not one for moving swiftly, but that night I ran faster than I ever had, eager to stop whoever was in my flat.

I ran up the outside steps, punched in the code for the back door, and darted up the steps towards my apartment. Getting my key ready (I don’t know why I did this if I thought someone had broken into my flat), I put it in the lock and turned it – It was only after this that I realised I had to unlock the door. As I pushed open the door, a cold chill hit me, and I ran into the front room. Stepping into the room, all I saw were the blinds moving erratically as if someone had knocked them. I walked over to the French doors and checked them. They were locked.

I stopped for a minute listening to the dark apartment. Everything seemed to have gone still and silent as if all the noise had been sucked out of the air; I couldn’t even hear the cars driving down the road right outside.

Wanting to make sure that no one was in the apartment with me, I checked all the rooms, turning each light on as I went until I was left with a very well lit empty apartment.

I walked back into the front room and sat down on one of the sofas trying to process everything that had just happened. I know I had seen someone in the window, but there was no way that anyone could have come and gone so fast and locked everything up. Even if they had, the blinds wouldn’t have still been moving to the extent that they were.

For the rest of the night, the apartment didn’t feel right. There was a heavy feeling hanging in the air as if it were charged with electricity. I constantly felt like I was being watched, and I don’t think I got that much sleep that night.

When I woke the following day everything seemed better. The strange feeling had gone and I no longer felt like I was being watched. At the time I got up to get ready and go to work, it was still dark, but even this didn’t make things seem off. I left for work, but before I felt comfortable leaving home, I double-checked that everything was locked up and there was no way anyone could get in.

I put this strange occurrence to the back of my mind, but this was only the start of everything that would happen to me in apartment 42.

I will continue the story in next week’s Monday blog.

19 thoughts on “Ghostly Occurrences in Apartment 42: Part I”